Prostate cancer is the most commonly diagnosed cancer in Australian men and the second most common cause of cancer related death. Diagnosis and treatment is constantly evolving and there have been several refinements in this area. In this article we discuss the new prostate biopsy equipment available at Lakeview Private Hospital and the new and updated system for grading prostate cancer.

While PSA screening has its detractors, there is high level evidence to show that screening saves lives (European randomised study of screening for prostate cancer – erspc.org). The RACGP does not advocate general population screening, however there has been an increase in awareness in the community for both PSA screening and men’s health in general. To provide guidance in this matter, the Cancer Council and Prostate Cancer Foundation released an evidence based guideline on PSA screening (http://www.cancer.org.au/health-professionals/clinical-guidelines/prostate-cancer.html).

A summary of recommendations is listed below:

If a man is screened and PSA readings are elevated then further evaluation is needed. This usually takes the form of a digital rectal exam (DRE) and multiparametric magnetic resonance imaging (mpMRI) which is followed by prostate biopsy.

What techniques exist for prostate biopsy?

There are two main approaches for prostate biopsy – historically this was done via the transrectal route. While lying in a left lateral position, an ultrasound  probe  was   inserted into the rectum and the periprostatic tissues were infiltrated with local anaesthetic. About 12 needle cores were taken of the prostate. This has the benefit of being quick and relatively easy, however there was often discomfort during the biopsy, inadequate sampling of the anterior prostate as well as a risk  of sepsis; an uncommon but often serious complication.

Over the last few years, transperineal biopsy (figure 1) has emerged addressing some of the shortcomings of the transrectal approach. Very specialised equipment is required. Lakeview Private Hospital has invested in the special ultrasound probe as well as the stepper required to hold the ultrasound and grid in place. This equipment is displayed in figure 2. At the time of printing, Lakeview Private Hospital is the only hospital in North West Sydney that has this equipment.

Under general anaesthesia the patient’s legs are placed into an extended lithotomy position. The ultrasound probe is inserted into the rectum. A special arm holds the probe and a grid in place. The prostate is visualised with ultrasound (figure 3) and the needle is then used to take systematic biopsies of the entire prostate. This is sometimes known as a template biopsy.

What are the advantages of transperineal biopsy?

From a cancer detection perspective, transperineal biopsy allows systematic biopy of the entire prostate. A series of samples is usually taken at the apex, midzone and base to ensure the entire gland has been sampled. There is also much better access to the anterior prostate compared to transrectal biopsy. Critically, the sepsis rate is also negligible compared to transrectal biopsy, as the needle does not pass through the rectal wall. Patients will have a degree of perineal bruising, haematuria and also haematospermia. Patients are usually discharged a few hours after their prostate biopsy to ensure that they are voiding appropriately as there is a small risk of urinary retention.

It usually takes a few days for the pathology report to become available. The pathologist reports on several findings:

The main goal is to place the patient into a category or risk grouping that guides treatment and provides information about prognosis. The Gleason scoring system was first introduced in the 1960s and has been refined over the years by the International Society of Urologic  pathology  (ISUP). The Gleason score is the sum  of the most common pattern and the second most common pattern. The Gleason pattern ranges from 3 to 5. Pattern 3 is considered low grade disease while pattern 4 and 5 are high grade.

Using the Gleason score we then categorise patients into low, intermediate and high risk disease as illustrated in Table 1. Despite revisions the three categories are not ideal – low risk (Gleason 6) disease can be misunderstood as a cancer in the middle of the grading scale. This can impact on patients being considered for observational rather than active interventions. Gleason  scores  3+4  and  4+3 are also considered to be in the same prognostic group when the disease free survival rates are quite different. Hence, in 2015 the group grading system was introduced. It is currently in use within Australia and most labs already have added the grade group to their histology reports (usually located right at the end after the synoptic report).

The main advantage of the Grade group system is that it allows  more accurate prognostication. It separates 3+4 and 4+3 and places them in different categories as they have significantly different disease free survival rates. It also makes it easier to put patients with low risk disease onto Active Surveillance protocols when they are told their cancer is grade 1 of 5 (Epstein et al, European Urology  69  (2016) 428-435).

While it is a definite improvement, the new group grade does not take into account the volume of disease, number of cores or the percentage of cores filled with cancer. Clinical judgement and patient factors/desires need to be considered. Options for treatment include Radical Prostatectomy, radiotherapy or brachytherapy. Some of these options will be explored in later editions of this newsletter. 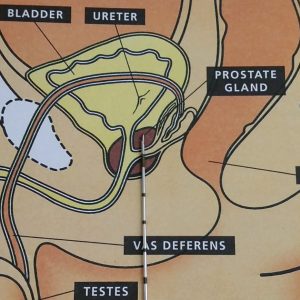 Figure 1 – Schematic showing a cross sectional view of the male pelvis. The prostate is clearly visible (burgundy colour) and the biopsy needle traverses the perineum to sample the prostate. We use an 18 gauge biopsy needle that removes a core of tissue. 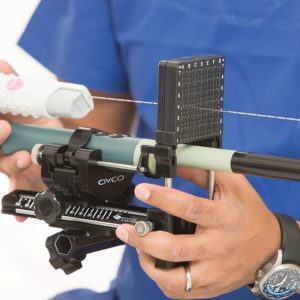 Figure 2 – The ultrasound probe is green with a black end that is inserted into the rectum. The black stepper is attached to a special arm that attaches to the bed. The grid is visible above the probe and the core biopsy needle passes through the grid. At the time of biopsy the grid sits up against the perineum. 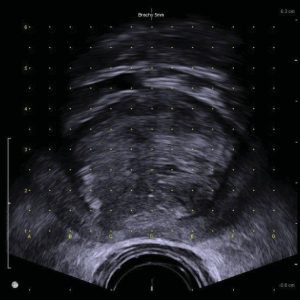 Figure 3 – Ultrasound image of prostate with grid overlaid. The probe is in the rectum. The prostate is clearly visible and the yellow dots correspond to the grid visible in Figure 2. There is 5mm between each grid mark. Using this grid, samples are taken on both the left and the right sides of the gland, usually posterior, middle and then anterior. This process is repeated at the apex, middle and base of the prostate, thus ensuring the entire gland has been sampled.

For clarification or referrals both Prof H Lau and Dr Arianayagam are happy to be contacted at any time. 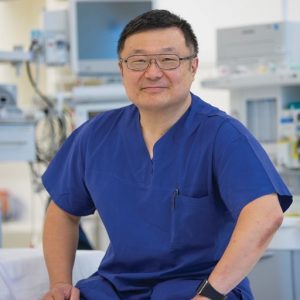 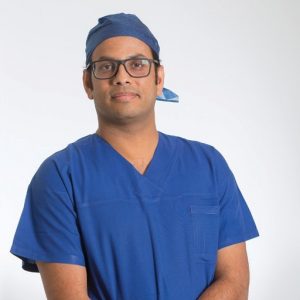